Week 6 in the gardens

It's been a beautiful sunny week leading up to the longest day so the gardens are all preparing for productivity! The CC household are contemplating stopping the veg box order for the summer with the prospect of spicy salad leaves, chard and spinach, sugar snap peas and potatoes all begin being harvested in the next week. 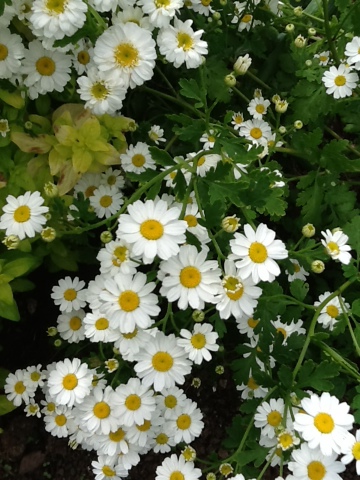 The Coombe cottage garden 'allotment' triangle has switched from blues and purples and pinks to a lovely dapled pattern of green and tiny white flowered towers of peas, feverfew and foliage.

Best plants of the week have been
1. The mixed sweet peas ( sown 18 January inside - Frangatissima, Turquoise lagoon and Purple Pimpernel as well as a few unannmed saved sed from 2014) We started picking this week, and the scent is fantastic. We are planning to give a bunch away every other day. 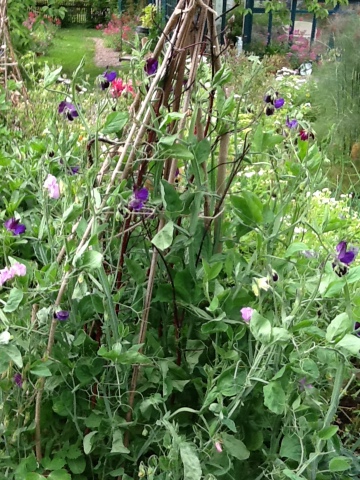 2. The night stocks  ( sewn 1 March and planted out 26 April)  are beginning to bloom - we'd thought they would be white but have come through beautifully pink, white and purple. We can't bear to pick them yet! 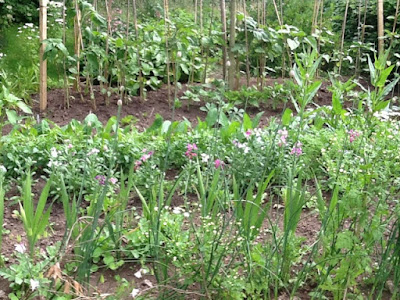 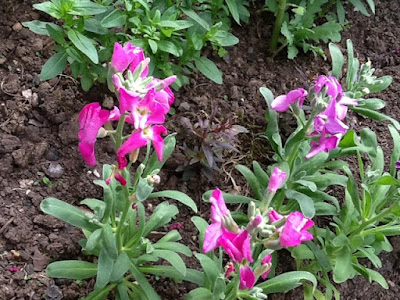 3. The bright star-white flowers of love in-the-mist - the contrast between the green frondy foliage and the white is even better than the traditional blue.
4. The cutting patch is coming along nicely with the alliums finally beginning to burst at the front and the sunflowers at the back starting the spurt to the sky phase of their lives. The technique of planting in a trench which you then earth up to give more support seems to be working alongside the new support canes and wires.

Casualties have been few this week - black flies are continuing to really plague the beans, and are now even spreading through the feverfew and bolted spinach. We are continuing to knock them off with a hose. We really need to plant earlier in the year.
And are those alliums going to burst? They've been at the point of flowering for nearly 6 weeks! 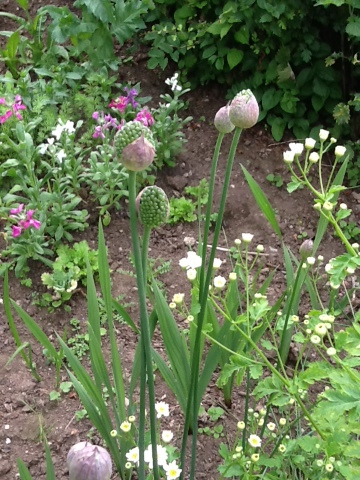 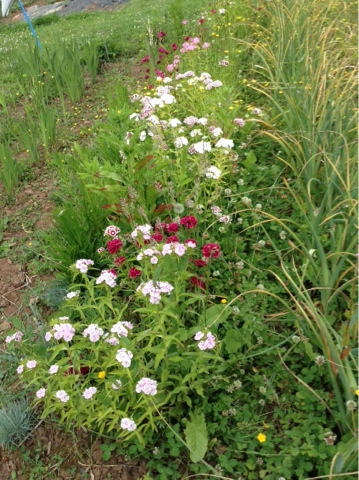 S returned from her French meanderings to a mega-weeding week and now the cutting patch is coming along well. There look to be lots of lovely self sewn flowers from last year coming through. The summer palace was celebrated by book group with a balmy summer evening without any insects swarming!

Best plants are those amazing carrots again- we swear they've put on 6 inches in a week, 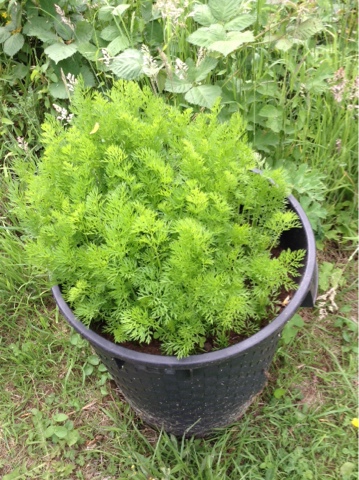 the bright orange of the calendula, and the fantastically fruitful loganberries and blueberries. 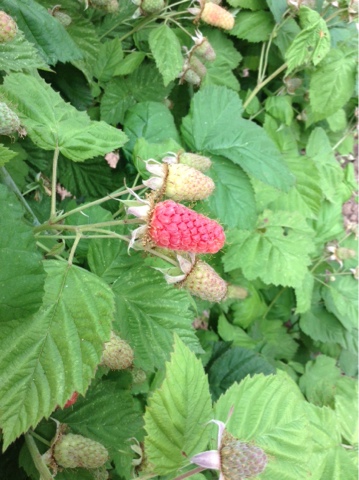 Difficulties are with the gypsophilia-n-bean-eating rabbits. However s and r are finding the organic repellant they applied before going (liquid fence) may be working after all our doubts.

Fact of the week: For centuries, carrots have been connected with health benefits. In the Middle Ages, carrots were believed to cure anything from sexually transmitted diseases to snakebites. Carrots became associated with vision, particularly night vision, during World War II. The British Royal Air Force published a story that said skilled fighter pilot John "Cats' Eyes" Cunningham could thank a steady diet of carrots for his night vision flying prowess. In response to the story, many British people began to grow and eat more carrots. They wanted to improve their vision so that they could see better during the compulsory blackouts that were common during World War II. Although Cats' Eyes' carrot eating made for a great story, it was, in fact, propaganda put out to conceal the fact that the Royal Air Force's was actually using radar to locate Luftwaffe bombers during the night.